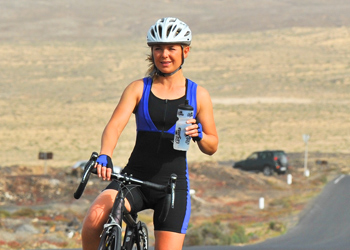 In triathlon, the swim probably gets the largest number of newbies nervous about race day. Most beginner triathletes don’t come from a swim background and the idea of swimming any distance in (cold) open water is a bit nerve-wracking!

Others fear the run (HOW are you going to run after swimming AND cycling?!) But other than concerns about fitness level or questions about whether to use clipless pedals, most beginner triathletes don’t seem overly concerned about the cycling leg.

Even if you’ve ridden all of your life, there are some easy tips to make your triathlon bike leg better. You will spend the majority of your time in a triathlon on the bike, so even if you feel comfortable with basic cycling, it’s worth spending a little time thinking about how to get the most out of triathlon’s longest leg.

1. Know the rules about your helmet

2. You can ride the bike you have now (probably)

Many new triathletes’ biggest biking fear is that their bike isn’t up to scratch. Whilst you may be faster on a top-level triathlon bike, you can also ride a road bike, a hybrid or a mountain bike. As long as the bike is in road-worthy working order (a good tune-up is way less expensive that a new bike!) and has two brakes and no fixed wheel (it’s not a “fixie”), it will be fine for the race. Yes, there will be racers with amazing bikes. Yes, they may come flying past at the speed of light. But isn’t it more important to be certain that you even like this whole triathlon thing before you spend thousands on a fancy bicycle? The good news is that after training and racing on a heavy hybrid, you will really fly if and when you decide to upgrade!

Note: It’s a smart idea no matter what style of bike you ride to check the fit (professionally or using online tips at home). This will allow for the most comfortable ride and the least likelihood of injury.

Triathlon shorts are made for triathlon. They have a nice, thin, quick-dry pad, which means less chafing and no extra fabric bunched up where you don’t want it. Trigirl tri shorts and trisuits have top-of-the-line women’s-specific pads, meaning that they are ergonomically shaped to offer the best comfort on your bike.

Additionally, that tempting giant, squishy gel saddle isn’t that great either. The perfect saddle should be wide enough to support your sits bones (a good reason to look for a women’s saddle), but any wider has the potential to chafe and the gel is just one more thing to bunch up where you don’t want it!

This one applies to all cyclists, not just beginner triathletes!

Without coaching, it’s easy to head out on a bike and just start pedalling, with no real thought of proper pedalling form or correct cadence (the speed at which your legs turn the pedals).

Your cadence should probably be quicker than you think- a good range is between 80-105 RPMs (rotations per minute, per leg) on flat ground. Studies have shown that 90 RPM tends to cause less leg fatigue and is therefore a good sweet spot to allow for easier running off the bike. To measure your RPMs, either count the number of times your leg hits 6 o’clock in 15 seconds and multiply by four, invest in a cycling computer that shows cadence, or try a good spin or Wattbike with a cadence monitor.

As far as pedalling form, if you’ve been told to work on the pull-up, forget what you’ve heard. More power comes from maximising power at the 3 o’clock position (and having a nice strong core and  glutes). Check out this article from Cycling Weekly for more details on achieving your best pedal stroke.

5. Know what drafting is- and don’t do it on the bike 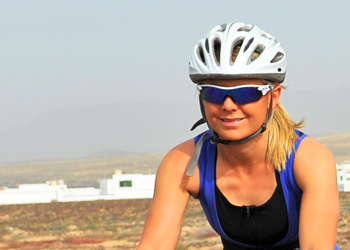 British Triathlon Federation rules prohibit drafting on the cycling leg of the triathlon, so it’s important to understand what drafting is and not to do it.

Simply put, drafting is riding close behind another rider, which allows you to take advantage of their slipstream and reduces your energy output. While this sounds like a great way to save energy for the run, it’s not allowed (except in draft-legal races) and if caught, you will incur a penalty.

To avoid drafting, stay at least seven meters back from other cyclists except whilst passing. You have 15 seconds to pass or to drop back. And as triathlon cycling rules also dictate that rules of the road apply, you should always ride on the left, pass on the right.

Enough reading, it’s time to start training! Get out and enjoying your cycling, swimming and running- and have a great race season!