This year I am taking part in my first triathlon, and I have to say it’s one of the most daunting challenges I will have faced yet. There seems to be so much to think about, and so much I should know – but don’t know who to ask! I was looking at triathlon specific clothing ranges when I came across www.trigirl.co.uk and saw that they were holding a couple of novice triathlon training days for beginners and more advanced female triathletes (I call myself this despite not having done one yet!), so I signed up without any hesitation.

Having been a keen runner, it’s quite daunting going to something like this when you don’t feel that confident in your sport as a whole. When I arrived though and got chatting to the other girls there was such a mix of ages and standards, and strong sense of camaraderie, that I instantly felt comfortable.

The coaches, Sharon Taylor and Jo Haley were from TriSport Coaching UK, and what was really helpful was that they both had different approaches to training, so we were able to benefit from two different perspectives. They were really responsive to our specific needs and tailored the day to suit us as a group. For each discipline we went through the theory and then had the chance to try it out, and as the event was held at Willesden Sports Centre we had a pool and running track at our disposal.

The running section was really helpful as a reminder for me of drills I have learned in the past, and it was interesting to find out what cadence and posture is best for running a triathlon.

After only half an hour in the pool I went from vowing that I would only ever be able to do breast stroke in a triathlon, to actually feeling quite confident about my front crawl.

Having only bought a road bike a couple of weeks ago I am a total rookie when it comes to anything to do with bikes, which is obviously a bit of a hindrance when you’re planning to compete in a triathlon. Not only did Jo give us technical advice on everything from how to remove a back wheel to gear changes, but we also had the full cycling proficiency treatment of learning to ride one-handed, looking behind and steering round tight corners. I now feel at one with my bike and a far more confident rider.

Transitions were also covered, with valuable tips and time-savers, including a demo from Sharon on how to remove a wetsuit under pressure. We were also given a comprehensive checklist of items that should be in our kit bag on race day, and the dos and don’ts to avoid being disqualified. 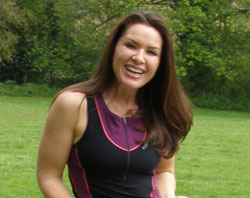 I have to say that I came away from the training day vastly more confident and totally excited about my training. It was a full on day, as coaching continued whilst we ate our lunch, so a lot was packed in, but I was still astounded by how much I picked up in one day and the difference it has made to my motivation. I also now feel fully kitted out, as I was able to get myself a Trigirl tri suit, so I now also look the part. I guess it’s just down to me putting the hours in!

“The facilities were very good and the training advice was excellent, really worth while. Money well spent” – Anna Graham

“Just a big thank you for making my first triathlon seem a little less daunting as I will be much better prepared for it than I would have been had I not attended the day!”  – Helen Woolley

“Just wanted to thank you for the extremely helpful and informative workshop on Saturday with Tri50. I really enjoyed it and got a huge amount out of it. I will keep an eye out for any other events you organise.” – Claire Jackson

“Just wanted to say how good the Trigirl training day in Bristol was – lots of useful tips and advice, and the swimming drills were especially helpful. Looking forward to putting it all into practice in training and my next race! ” – Rachael Willis

“Can I just say what a fantastic and informative day I had on Saturday in Bristol with Kim. She was BRILLIANT and all my objectives of the course were met and more…many many thanks!!” – Paula Cardwell