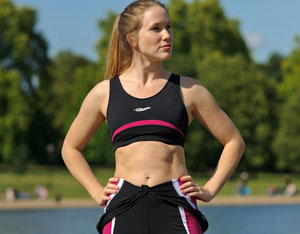 I might be going out on a limb here, but I’m pretty sure most women have it. The dreaded body part. The one that you try to cover up or that you work on endlessly at the gym or that you squeeze in the mirror, wishing it would go away. For me, it’s my legs. Thighs too big, ‘saddlebags’ no matter my weight and if really hard-pressed, I’d say my calves aren’t very shapely, either. Or I should say it was my legs until I started doing triathlon.

It’s January and with it, the time of year that many people – both men and women – make the commitment to lose weight. Of course, the quest for weight loss comes in all forms, ranging from starvation diets to new exercise regimes to the latest gadget. And yes, some people turn to triathlon. You swim! You ride a bike! You run! How could you not lose weight? And so begins the triathlon journey…

Triathlon is, without a doubt, a great way to get fit. It provides all of the basic and important elements: motivation, a goal, a healthy exercise plan and a recordable result.

Unlike fad diets or weird gadgets, training for a triathlon is not a quick fix that gets boring, but a varied schedule, an exciting challenge and a goal that can be conquered.

One reason people lack motivation is a lack of direction. It’s easy to say that you want to lose weight, but other than hoping that the numbers on the scale go down, weight loss in itself isn’t a direction. Triathlon directs you towards something, a literal finish line. That finish line and the desire to get there is a powerful motivator. 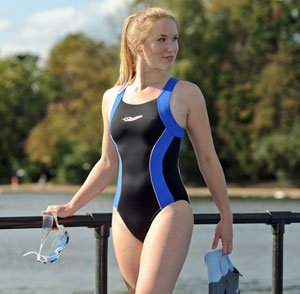 Signing up for a triathlon gives you a goal with a deadline. Whether your goal is to finish your first race or to go longer or to go faster, race day is there, marked in your diary. And even if the goal seems daunting, it is a goal that can be broken down into smaller parts, making them seem more achievable. Run a little longer today, get on the bike tomorrow, swim with the swim club on Tuesday.

In fulfilling your training goals, weight loss becomes less of a focus, more of a consequence. The goal is now something bigger and even more exciting.

For weight loss or for overall fitness, triathlon is one of the healthiest exercise plans you will find. It works the entire body, but unlike sports like running, there is an automatic cross-training element built in. In other words, it is not as hard on your body to run one day, cycle the next and swim the next as it is to run three days in a row. You are working different muscles, making overuse injuries less likely and developing a well-rounded strength. In addition, it’s mentally more interesting – instead of mindlessly attending the same class or doing the same run, each day is a bit different.

What’s a goal without results? In triathlon, results are recordable. Race finishes, distances, training times… and potentially even a lower number on the scale, too. 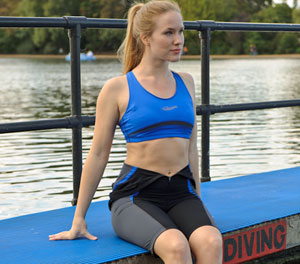 Another motivator is confidence. And what could be more confidence-inspiring that completing a triathlon? Yes, you– crossing a finish line that once seemed so far away! Which in turn leads to more motivation… can I go longer? Can I go faster? And so the journey continues, unlike that diet that was boring by March.

So what about my legs? They were my dreaded body part prior to taking up triathlon. Did they get skinnier? No more saddlebags? Are my calves more shapely?

Well, they are definitely stronger (and less flabby!) But more importantly, I just don’t care so much any more. Now I look at my legs and know that they’ve taken me more miles than I ever thought possible. They have ridden up hills that were once too steep and have crossed finish lines faster and stronger than I knew I could go.

So is triathlon the ultimate weight loss plan? The guaranteed fix? The world’s greatest miracle diet?  No… but as a confidence-building, fitness-inducing, healthy lifestyle-creating sport, it is pretty miraculous.