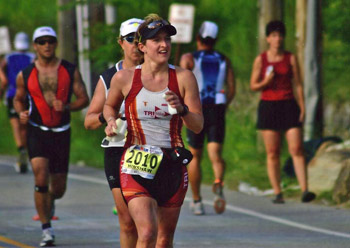 Completing an Ironman triathlon (2.4 mile swim, 112 mile bike, 26.2 mile run) is impressive for anyone. For Jenny Hinshaw completing the Lake Placid Ironman in 2004 was nothing short of amazing.

Sure, Jenny was young, athletic (having been a university-level swimmer at the University of North Carolina Chapel Hill), and determined. Like so many triathletes, she wanted to complete an Ironman to do something that she never thought she could do. What made Jenny’s race amazing was that she finished her first Ironman just two years after finishing treatment for Stage 2 Hodgkin’s Lymphoma, a disease in which cells in the lymph nodes become cancerous. Treatment that included six months of chemotherapy and 15 weeks of radiation treatment.

Since finishing treatment Jenny has done a lot more than that first Ironman. She has finished two Ironman races, run three marathons, and is currently training to run her fourth marathon in June, 2012 to celebrate 10 years in remission. Perhaps even more amazing, Jenny has raised over $50,000 for cancer charities, often through competing in athletic events with organizations such as Team in Training (TNT), a New York originated fundraising organization run through the Leukemia & Lymphoma Society.

But ask Jenny what she feels is her biggest accomplishment and she seems a little torn: 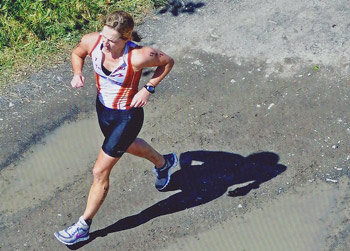 “As crazy as this sounds – one of my biggest accomplishments is living 10 years in remission.  I have a village of family, friends and doctors who have gotten me there but I remember at my first TNT meeting I heard a cancer survivor speak who was ten years out [in remission].  I couldn’t imagine how that must feel since I was only four days out…..now that is me!”

Having overcome her own challenges, Jenny feels strongly that a triathlon goal is realistic for all women, even if it seems insurmountable. “I believe everybody can do anything if they really want it!  If they put the necessary time into it with 100% commitment….success (on whatever level) is achievable….just believe it can happen!”

Jenny has inspired people all over the US both as a “first connector” – where she mentors newly diagnosed women with Hodgkins and as an honoree – a cancer survivor who publicly speaks and thanks people for their involvement and commitment to fundraising, stressing the number of lives that are saved daily due to their contribution toward research. Personally she’s inspired seeing others who’ve overcome obstacles, whether through illness, accidents, or injury, saying, “Hope is everything….and witnessing great things gives everyone hope!”

Seeing the hope in everything has certainly helped Jenny get to where she is today:

“I wouldn’t have ever chosen to have lymphoma but what a wonderful life I have had in the last 10 years – giving back, helping others, offering hope, challenging myself with new sports and meeting wonderful friends through TNT – that is the light at the end of the tunnel and may very well have made my ‘inconvenient year’ (a quote from Joseph Moore, MD, the medical director of the Duke Raleigh Cancer Center) worthwhile.”