What Does it Take to Do a Triathlon?
Determination, Guts, Oh… and Learning How to Swim

Newbie triathlete Helena Redshaw shares the story of completing her first triathlon. Though she insists it’s a bit wordy, we really enjoyed every detail of her experience and think you will, too. Short on time? Don’t miss the last two paragraphs where Helena’s words are sure to inspire you, no matter where you are in your triathlon journey! 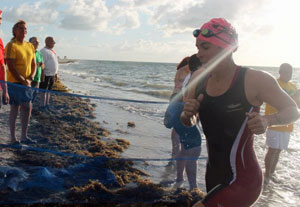 What does it take to do a triathlon? Well of course all the inspiring stuff….you know….sheer determination, 100% commitment, being focused, overcoming your fears and setting your mind to something and making it happen. Then there’s the other stuff, being able to run, bike and swim. I had the run and bike down but the challenge for me was the swim. “Will you ever do a triathlon?” I was asked back in 2010 while busy cycling up and down the A1A and running a few times per week. My response “Er no, you have to be able to swim right? I can’t swim, so it’s not happening!” My mind was made up it seemed. No triathlons for me. I spent the end of 2010 and most of 2011 focusing on cycling and running. I completed some duathlons, a marathon and other various running races and while I was completely satisfied with those goals, I knew I wanted more. 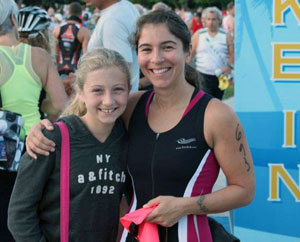 In December 2011, I declared my intention to the world, well, to my Facebook friends “I shall learn to swim and complete a sprint triathlon in 2012!” Call it a birthday gift to myself for turning 40! I obtained a wonderful and patient swim coach and started lessons in January. He called me ‘Helena of Tri’. I spent the first few 5 am sessions bobbing my head in and out of the water just learning how to breathe…calmly. It was back to basics for this mother of two. My two daughters thought it was hysterical how I would practice my breathing in the bath tub. “Swimming is hard”, I would tell them and they would just say, “It’s so easy!” Learning to swim is physically the most challenging thing I have ever done in my life. Respect to the swimmers!

With my new found swimming respect and my confidence slowly building, I was nicknamed the ”Running Mermaid” by one of my close friends. After 3 months, I managed to get across the 25 yard pool…not that graceful like those swimmers you see on TV but getting across, doing laps, not sinking and breathing correctly. I’ll take it! I just needed to be able to swim 9 laps without stopping to complete a sprint triathlon! 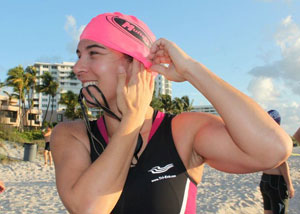 Feeling somewhat ready and after 3 months of swim instruction, I signed up for the FAU Wellness Sprint Triathlon. I was not concerned about the bike or the run just the swim. It was an ocean swim and I was absolutely petrified of the ‘deep’ ocean and wait, what about those sharks I had read about?! The day sneaked up pretty fast with the weather forecast not looking good. I spent the entire morning of the triathlon monitoring the weather updates, talking with friends, who tried to calm me down, and wrestling with my emotions. The anxiety and anticipation of really not knowing how it would turn out turned me into a bag of nerves. However Mother Nature, not in the best of moods, turned my triathlon debut into duathlon. 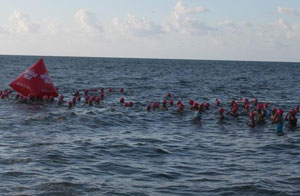 “I demand a re-do” I said on my Facebook page and promptly signed up for another triathlon the following weekend only to see that one cancelled due to weather. Is it me or did Mother Nature have a reason why she did not want me to participate in a triathlon? They say that three times is a charm so I signed up for the Mack Cycle Key Biscayne International Sprint Triathlon in Crandon Park, Miami. It was also another ocean swim; 400 meters, 10 mile bike ride and 3 mile run.

On June 17 2012, I officially became a triathlete and a real ‘Running Mermaid’ on Wheels! I was surprisingly quite calm about the whole event. I think that’s what happens after trying two times before. All the anxiety and fear was removed. I just wanted to do this thing! 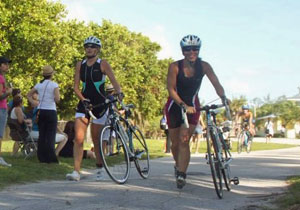 So what was it like? The challenge of swimming in the ocean is immense yet very magical to me. I enjoyed one training swim in the ocean as I got to swim with the fishes. Such a mermaid! The ocean on race day was choppy and we had to swim against the current. And it was black (where are my fishes I thought?). I followed all the other pink caps (a fabulous choice of colour for me as it matched my Trigirl Olympus Tri Suit) into the ocean, heard the starting horn and I just went for it. I stayed focused and all I thought was “just keeping swimming”. I had heard the horror stories about how people hit you on the head or grab your feet when you’re out there but it was not like that at all. You do get knocked about a bit or bump into people but you remain calm, look up, sight your goal and just keep going. The buoy looked really far yet before I could blink I was at the end of the course being greeted by my 11 year-old daughter. The feeling of getting out of that ocean and knowing that I swam the whole thing was incredible and something I’ll never forget. I earned my mermaid status that day and was super proud of myself. Once the swim was completed I knew I had the rest of the race in the bag. Transitioning from the swim to the bike was a little challenging, especially getting your socks on over your wet feet (must invest in tri shoes!) but as long as you remain calm, it is a pretty easy transition. 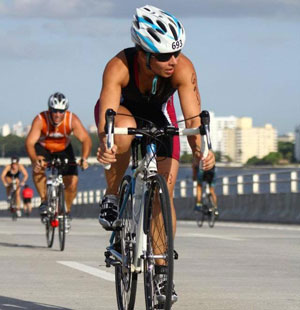 I loved the bike portion. I have been road cycling since 2010 and I love the thrill of speed in a race. The conditions were windy and the causeway in Miami was a challenge but I do like a challenge. I had to remind myself not to go too hard on the bike like I usually do as I needed something in the tank for the run. Transitioning from the bike to the run was interesting. There is a reason they call it Brick training. Your feet do feel like bricks when you start running. Jelly legs! The run was great as you know this is the last portion of the race and you’re almost there. My thought process was just stay steady, stay on pace and takes small steps. I felt good during this run but thankfully it was only 3 miles. I couldn’t imagine running a longer distance. Then I saw it! The finish line! I had set the goal and made it, my thought as I crossed the finish line.

My overall time was 1:21:35 and I was extremely happy with my splits. Of course the race was not about the time or the medal. It was about setting the intention and following through. It was about challenging yourself to do something you didn’t think you could do and making it happen. It was about dreaming big and inspiring my kids to dream big too. It was about making the memory and now having that memory forever. It was about wanting to better yourself every day and believing in you. It was about always moving forward and never looking backwards. Talking about moving forward I’m now being asked “Will you ever do an Ironman one day?” My response to that is “do Mermaids swim?” 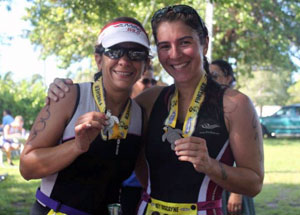 If you are new to the sport, want to sign up, but are afraid of the swim, my advice is to adopt the ‘why not?’ approach. Because seriously- why not? We can do anything we want if we are willing to work hard, stay focused and be positive. If you want it that badly it will happen. Don’t let anyone tell you differently or try and talk you out of your goals. So go ahead and remember to think big, always bring it, make memories and inspire others. What are you waiting for?