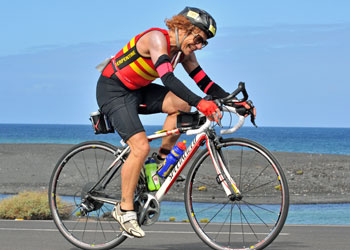 A few months ago, we posted an article and video featuring inspiring triathlete, Edwina Brocklesby. We’re pleased to say that she has inspired us again!

Congratulations to Eddie who on Saturday, at 70 years of age, became the oldest British Ironman finisher in history. Not only that, but she set the record in Lanzarote, considered one of (if not THE) most challenging Ironman course.
From the Ironman Lanzarote blog feed:They started in pouring rain this morning and had to contend with very wet roads on the bikes. Then they climbed 8,000 feet into a testing headwind. By the time they got back to transition the sun was searingly hot as they began their run. As the sun went down, they dealt with running into it, and once it had gone, the temperature dropped dramatically. Lanzarote has once again served up a dramatic and fascinating race and has lived up to its reputation as one of the world’s toughest.

Eddie, you are AMAZING!

We’re also quite proud that Eddie reported back that she wore her Trigirl armwarmers throughout the 112-mile bike!

For more on Eddie (and to be inspired by her energy!) see our video here.

We’ll need to get to work updating our article to include her latest and most amazing accomplishment yet!

“I can’t do a triathlon, I’m too… old? overweight? non-athletic?”

Whatever your excuse, we think that you CAN do a triathlon!

Don’t believe us? Trigirl’s inspirational video, featuring Irongranny triathlete Eddie Brocklesby, will change your mind. Eddie not only took up sport at the ripe young age of 53, she has since run marathons, done triathlon at highly competitive levels and ridden her bicycle more miles in a year than some of us drive in our cars.

Watch Trigirl’s video and hear about Eddie’s accomplishments from the woman herself- we think you’ll be motivated to get out there and do something amazing, too! No excuses 🙂

Thanks to Audiofuel for providing music to go along with Eddie’s story. If you like your fitness inspiration in the form of a good beat, check out Audiofuel’s full line of adrenaline-packed musical arrangements, available as motivational coached sessions or just great audio compilations to keep you moving!

Looking at Edwina (‘Eddie’) Brocklesby, the first thing you notice is her ever-present smile, radiating from beneath a sea of bright red (or sometimes more magenta, depending on the season) curls. But look closer and you’re bound to start noticing something else. Mainly that while Eddie doesn’t look young exactly, judging from her sinewy, muscled arms and her, frankly, great body, it’s really quite difficult to determine her age at all.

Well, she doesn’t mind telling. Eddie is 75-years-old. But far from being ready to relax into a quiet life of retirement, she’s running a charity (Silverfit) to promote happier, healthier aging through physical activity, is making the rounds promoting her new book, Irongran,  and recently finished Ironman Cozumel.

This ongoing buzz of activity is simply what a World Champion duathlete, Race Across America cycling race finisher, and Britain’s oldest female Ironman triathlon finisher does. Though for Eddie, none of these accomplishments were something she had considered prior to the age of 53. Running, and later, duathlon and triathlon became a priority in Eddie’s life after the early death of her husband. Finding support within her running club (the now-defunct South Notts Pacers), Eddie also found that running was the fuel to keep her going through her grief. 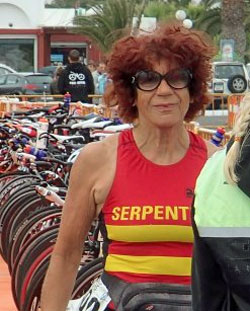 After a knee injury forced her to focus on something other than running alone, Eddie, inspired by one of her sons, took up triathlon. After realising that swimming wasn’t her favourite leg (nor her strongest), Eddie went on to give duathlon a go- and to win her age group at the World Championships in Switzerland!

But according to Eddie, it’s not her World Championship win that is her proudest athletic accomplishment. Instead, it was winning her age group at Ironman Lanzarote at age 67, though she will also modestly admit that she may have been the only woman in her age group. Maybe, but she was also the oldest female finisher of the infamously grueling race, and easily beat the 17-hour cutoff time, finishing in 15:45:09.

Eddie was also part of a four-woman team, affectionately dubbed the ‘Golden Girls’ to race the 3,014 mile Race Across America (RAAM) in 2010. The team finished in just over eight days and became the oldest team to finish the race, a feat that required teamwork, sleep deprivation, and perseverance, something that it seems Eddie has in droves. 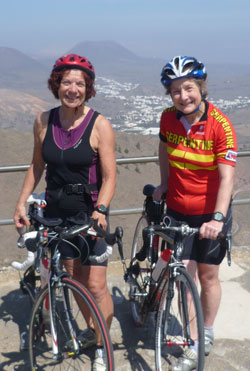 But although Eddie is passionate about her own training and racing, what she is really driven by is the desire to share her passion with others, specifically over-50s. Part of sharing this passion has come through the charity she founded, Silverfit. She hopes that more people will fight their diminishing fitness levels as they age, but ultimately supports sport for all. One of her dreams is to see more inter-family racing- grandparents and grandkids racing together and inspiring each other.

The circumstances that led Eddie to sport were ones that no one would hope for, but she has taken life’s lemons and keeps making lemonade.

“Aren’t I the lucky one? I still have energy and I’m healthy.” says Eddie with that smile and a look of determination in her eyes.

We can’t wait to see what she does next.

To read more about Eddie the Irongran in her own words, read her new book Irongran, available on Amazon and published by Little, Brown Book Group.