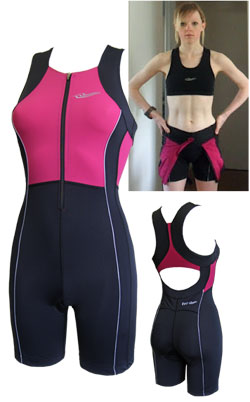 The first thing I noticed when I opened the packet containing the Trigirl Swift Trisuit was that a little black crop top popped out too, an added bonus! Worn under the suit, it is of matching design and whilst I’ve never considered female specific suits previously, it made for very comfy wearing and I experienced no rubbing or chafing. The suit is a lovely deep pink perfectly complimenting the main body in black.

I’ve only just returned to the sport of triathlon after four years and so with no particular races planned until July, I decided to wear it for a mini brick session. A brick session, for those who are unsure, is where you combine a run and bike together for example either a repeated set of ten minutes cycling, five minutes running or even just a short run following a bike ride or turbo session. This gets your legs used to the concept of a triathlon and perfecting running off the bike. I decided to try forty minutes on the turbo followed by a twenty minute run.
Four lots of five minute race pace efforts with three minutes steady pedalling in between made me get a bit of a sweat on, but the suit’s material felt so breathable and seemed to wick moisture away from my skin. I wish my pink turbo towel would do the same for my head!