We sat down with Trigirl designer and triathlon coach, Kristin Duffy, to ask her a little about herself, how she started designing triathlon clothing, and the exciting new Trigirl 2017 collection. Here’s a sneak peek into the collection and her triathlon world.

Kristin, how did you get into designing triathlon clothing for women, of all things? 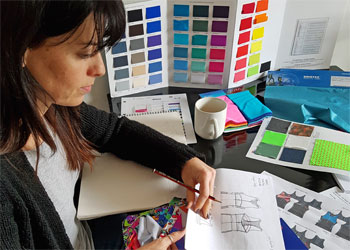 I’m originally from the States and was a children’s designer for Gap in New York. For a time, I was designing boy’s activewear. As a triathlete, I thought that it would be great to design triathlon clothing someday.

When I moved to London, I met Trigirl founder, Pat Victor, during a weekend away with my running club. She mentioned Trigirl and I “casually” mentioned that I was a writer and a designer. I’ve worked with Pat as both!

You mentioned that you’re a triathlete yourself. As an athlete, what is the most important thing you yourself would want from a trisuit?

Performance-wise, I’d want comfort – it has to dry quickly (I hate being cold and wet!) and it has to have a comfortable pad for the cycling leg. That same pad has to feel like it has magically disappeared when I’m running. I don’t want to run a race feeling like I’m wearing a nappie! Fortunately, we’ve done a lot of work to make sure Trigirl offers quick-drying fabric, an amazingly comfortable triathlon pad and a lot more. 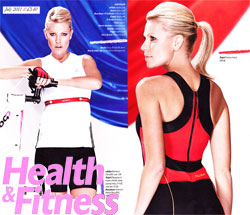 We are happy to announce that our newest collection is now being featured in this month’s Health & Fitness in the spread “Triple the Action”. Featured are our popular Victory trisuit, Champion trishorts, cycling mitts, and race belt- who knew it could look so chic!

See the photos in Health & Fitness in news stands now and continue to check our site for fashionable and functional triathlon wear.