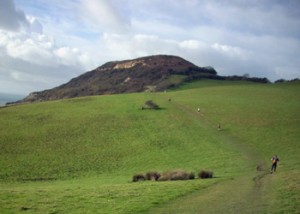 Having grown up in the flat terrain of Northern Germany, I used to absolutely despise hills. If there’s one thing I really don’t like it’s slowness, and that applies to everything in life. I’m terribly impatient.

Cycling up hills doesn’t give you the excitement of going fast on a bike and quite frankly cycling up hills is hard work. I was also put off by the fact that as one of the bigger athletes ‘im always on the losing end against some of the slender running girls, as soon as we are faced with an incline.

It was only when I discovered that the 70.3 Ironman in Monaco had qualifying slots for Kona for the following year that a plan formed in my head and I started changing my attitude. The Monaco course goes up and down, up and down, up and down. That’s all it is, no flats. So if I wanted to qualify for the big event at that race, I knew I’d better learn to love the hills. It just happens to be that the closest thing that deserves to be called a hill from where I live goes by the name of Ditchling Beacon. I knew that finding the type of long climbs I’d be faced with in Monaco in Sussex was never going to be possible. But it’s simple I thought, I’ll just ride up and down the Beacon until I’m knackered. And that’s how my love affair with hills started. Not only did I soon start to enjoy riding up hills, I also discovered a very welcome side effect. My time trial times started coming down, too. Funny how that worked?

Embracing the hills quite simply made me a better cyclist. Before I discovered the hills, I used to just go out and ride. Sometimes harder, sometimes easier. Occasionally I’d go and do intervals on the turbo or out on the cycle track. But it was fairly unstructured. It’s not that I didn’t know better, but my cycling was always fairly strong for a triathlete, so I wasn’t desperate to improve. My weekly hill reps did two things for me.

1)    It was easy to get motivated to stick to a structured interval program (Kona is pretty good for that!), and it kept me motivated when I was aiming for ‘one more rep than last week’ every week resulting in a measurable improvement.

2)    Not only did it improve my cycling-specific strength, it also forced me to do intervals at a higher intensity, because back then there was just no way I could climb that hill with an average heart rate below 150 with the gearing available on my bike.

In fact I was so impressed by how easy it was to improve on the bike, that even after netting the Kona slot I made hill reps an integral part of my cycle training. So the obvious reason for hill reps is getting better at exactly that – cycling up hills. But there are lots of other not so obvious reasons for this type of training:

– Safety! It’s hard to put out maximal efforts on the road and sticking to set timings while watching out for traffic. To me that kind of work belongs on the turbo trainer, with the exception being going up hills.

– You are less likely to cheat. How easy it is on a flat interval to just ease off a little when the going gets tough? Do that on a hill, and you either roll back down or fall off. Hills keep you honest.

– And lastly there is just something deeply satisfying about getting to the top.

While there are endless varieties to hill reps, I thought I´d share two of my staples.

Of course there are the Beacon reps. Just under a mile long, 10% average gradient, for me that is around 8 minutes up, 2 minutes to get back down. The twist: Start off in your lowest gear, and go one higher with every repeat until you can’t turn the pedals any longer.

The other one is short and sweet, but very effective. For standing hill reps you need a hill that is not too steep (think 4-6%, something that you can spin up seated) that takes you about 4 minutes to climb. Do 4-6 x 4 minutes ‘running on the pedals’, recover on the way back down. Watch out with this one, especially if you don’t normally lift off the saddle much, it’s a deceptive little session. And while a cycling session it’s probably the one that will help you’re running and core strength most, too.

While on the subject of core strength – you may have heard of climbing in the aerobars? Not a session as such, but I’m a big fan of this too. If I’m out on the TT bike, getting out of the aero-position is only an option if traffic conditions force it. The benefit of good aerodynamics may shrink at slower speeds, and you may actually be quicker up an incline if you sat up enabling you to engage your glute muscles more, but specificity is key, and in a race I’m most likely to spent >95% in the aerobars.

For me riding hills was something I set out to conquer as a means to an end, but it developed into so much more. Love the hills, and your cycling will go from strength to strength!