It started gradually. I was running with a group of friends in the woods, enjoying the fresh air and challenging myself to keep up, when I noticed a slight stiffness in my right knee. Slightly annoying – not serious.

The next time I ran, it was there again. Not immediately, but after about 2km, the same niggling feeling. Again I kept running…

A few weeks later I set off to do my regular 5km Park Run one Saturday at 9am – a timed run in a nearby park which I was running almost five minutes faster than when I’d first started.

Two kilometers into the run, my knee packed up. No pain, it just seized up, refusing to bend or carry my weight. I walked the rest of the way feeling disappointed, but not too put out. Nothing that a good ice pack and a few days of rest wouldn’t take care of, I thought.

More than two months later and I still can’t run. Not even a few hundred meters, never mind training for a half marathon as I’d been hoping to do as a kick start into the New Year. My new pair of cross country trainers I bought myself for Christmas are still in the box.

When eventually I realised the problem was not going to go away of its own accord, I became quite depressed.

I’d worked so hard, exceeded my wildest expectations – and I’d loved every minute of pushing my body to its newly defined limits and the running was the bit I loved most of all. I loved the freedom, the independence, being outside, escaping it all. It was an important part of me.

I’d also been looking forward to running in Cape Town, where I grew up and where we spent three weeks over Christmas. I was devastated when I couldn’t join the never-ending throng of enthusiastic joggers who lined the promenade from 5am till late, but had to settle for more sedate strolls along the beautiful beach.

I went to see a physiotherapist in Cape Town, who diagnosed runner’s knee. This was confirmed by a chiropractor in England. What? You must be kidding? I’d only started running. I loved it! What do you mean I have runner’s knee?? 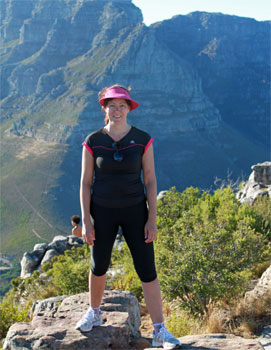 Runner’s knee is essentially a tracking problem caused by an imbalance in the strength of muscles in my legs. The outer muscles are too strong, pulling the knee cap off track, whereas the muscles on the inside are too weak to pull the patella back. This is causing a rubbing action and inflammation every time I try to run.

The good news is, Ben, the chiropractor in Chalfont St Peter, where I live, has promised to get me back running within about two weeks from now, albeit it slowly and not very far to begin with.

It also means I’d have to embark on a programme of strength training and stretching to try to correct the imbalance in my quad muscles in an attempt to get the knee back on track.

Whereas before this might have been the perfect excuse for me to opt out of any type of strenuous exercise and ‘accept’ that it was obviously not meant to be, I’m determined to not let a minor injury stand between me and my newfound zest for life.

I’ve been swimming and spinning three four times a week, interspersed with work-outs in the gym and a weekly yoga class to keep my fitness levels up and work on strength training at the same time.
My swimming time has improved from 25 minutes for 800 metres to 20 minutes and my bingo wings have tightened up nicely.

I have every intention to listen to my body and to take it easy until my muscles and I are ready to hit the road again, but we won’t give up. We’re in this for the long haul.
It feels too good to stop.