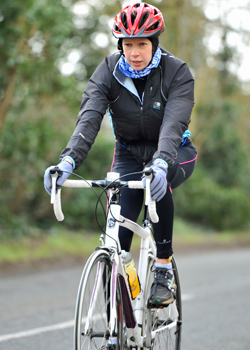 Let me take you back a week or so to Good Friday. A bit chilly, you may recall. A good day for curling up in front of a log fire and eating lots of Easter eggs. Or in my case, a day for embarking on my first triathlon of the season.

The Good Fri Tri at Radley College in Oxfordshire was the scene of my previous attempt back in 2011 and I’d decided to return to the same race to kick off this season, this time stepping up to the sprint distance.

We had been told if the temperature dropped below zero, it would be turned into a duathlon (run-bike-run), so you can imagine my joy (with not a hint of sarcasm, oh no) when it was announced that it was officially two degrees and therefore ideal conditions to ride a bike in wet clothes!

Thankfully the swim was taking place in a warm indoor pool and, with the large field split into different waves, we managed to avoid the chaos that I understand normally accompanies the start of a race. The 400m (16 lengths) went surprisingly well (‘well’ in the sense that I didn’t drown rather than being ‘well in the lead’!). I had estimated my swim time to be about 10 minutes, so I was pleasantly surprised when I exited the pool in 9:30mins. Not fast by any stretch of the imagination, but respectable for me!

Such were the freezing conditions, the organisers let us put some clothes on pool-side to avoid instant hypothermia in transition (apparently frozen bodies would have created a trip hazard!), so my lovely stylish Trigirl shorts and tri top were put under wraps as I piled on the thermal layers before heading out to try to remember where I’d left my bike…

Onto the bike leg and once we’d run 100m past some unscheduled road-works, away for the first of two laps that made up the 22km course. Unfortunately half of each lap was either into a headwind or with a nasty cross-wind which made me grateful for the thermals but wishing for a bit more ballast to anchor me down! 56 minutes later I was heading back into transition. Note to self: must work harder on those turbo sessions – I must admit I’d been cruising a little bit out there!

Despite having practised a few brick sessions, it was on somewhat wobbly legs that I headed out on my 5k run. To be honest it felt like my legs didn’t belong to me, so either someone had done a sneaky switch in transition or I hadn’t done enough training. I’ll leave it for you to decide.

The mainly off-road run was muddy to say the least. About a third of each lap was in ankle-deep mud (my trainers may never recover) which wasn’t ideal given my ongoing recovery from a stress fracture in my shin. However with my ever-supportive friends telling me to ‘man up’, I got on with it. A rather stately 26 minutes later (yes the mud really was that deep!), I crossed the finish line with a smile on my face to give me an overall time of 1 hour 37 mins.

Having had a chance to reflect since the race, I am pleased with how it went. While I was never going to trouble the leader-board (I came 19th out of 72 women and 136th out of 234 finishers overall), it has definitely fired up my competitive spirit and encouraged me to train harder to improve my times in the next race. Watch this space!

First Triathlon of the Season
0