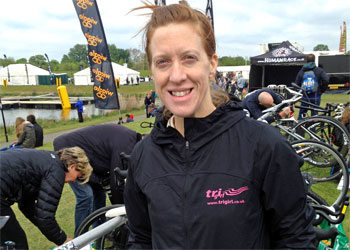 Husband and I, plus two friends, entered the 2013 Blenheim Palace Triathlon, for a dare.  You may think this unremarkable; however I was a renowned couch potato and he hated running. We began to exercise, but as spring crept closer, we realised that we were going to have to practice doing a triathlon. Before the proper triathlon, if you see what I mean.

We entered the Human Race Super Sprint at Eton Dorney, simply to find out what it was going to be like. (And if I would drown in the lake).  Olympic venue, too – exciting.  Standing where the greats stood etc etc. That would be inspiring, I  thought.  Plus, I simply wasn’t prepared to panic or suffer overwhelm at Blenheim.  To practice properly I decided that no parents or children were allowed; we (husband and I) just wanted to get a feel for it and see how it all worked.

Eton Dorney was, however, overwhelming in its own way. I was nervous, the women racking their bikes next to me were nervous, the men were nervous. And husband was definitely nervous.  But it was a very nice and supportive atmosphere – more a fun day out than race day. That certainly helped with the nerves. 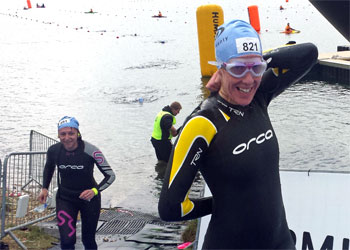 The swim was challenging for me and I did breastroke for little less than half of the 400 metre course. I came in about 8th from last in my group of 40 – which is pretty good for someone who could barely swim eight weeks earlier. The cycle was brutal. You pedalled as hard as you could for 2.5k straight, turned into the headwind for the 2.5k crawl back up the other straight – and you did this four times. But that wasn’t the hardest bit. The transitions were hard: I couldn’t get out of my wetsuit – a nice chap helped me. The wetsuit got stuck on my watch. I fell over. It was five minutes long. In comparison Jenson Button’s was less than one minute. Oh yes – Jenson Button was there. That also really helped with the race nerves. What a man. I mean athlete. I digress. That (clearly) wasn’t the hardest bit, either.

The hard, hard, hard part was the run. My legs were like jelly and I could feel my knees knocking as I ran. It was awful, soul destroying and mind-numbing. A 1.25k run down the lake, 1.25k back, 1.25k down again, 1.25k back.  There were a few people cheering at one end. No-one that I knew, of course, as they were banned. I recall thinking, “Oh don’t walk, you can do this. You run 5k all the time.” And, “Giving birth wasn’t this bad. In fact I’d rather just give birth again. Why did I do this? I’ll never manage Blenheim. I’ll collapse in front of my friends and family”.  Then it finally ended and I got a free coconut water.  Surprisingly, I soon recovered and felt pretty good. And at least we knew what to expect for Blenheim. 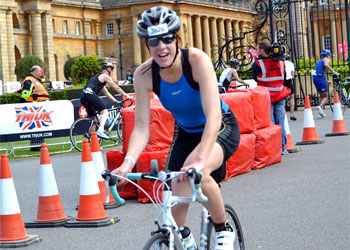 When race day came – wow – what a difference we felt. The buzz around Blenheim was magic. The sun was shining. The crowds were piling in and a lot of porridge had been eaten. We were nervous, yes, but we were ready. The Palace was simply stunning. There were famous faces – there were Olympians. The bike course was breathtakingly beautiful and the run up from the swim really was as hard as they said it would be. But the atmosphere was incredible and the cheers from the race support crowd really drove you on. People you didn’t know were clapping and cheering for you. We had a group of about 10 friends and family and our children supporting.  The kids made banners saying, “Go Daddy, Go Uncle Iain, Go Simon”. They waved them at mummy too – and they cheered me on. What a difference that made. In just one short month and thanks to 10 fabulous people, I went from novice triathlete, to Olympic Athlete…

I raced like it was London 2012. I swam strong and I swam steadily – front crawl for the full 750m. I cycled as if I was riding with Johnny Brownlee himself. I ran like Chrissie Wellington in an Ironman! When you round a corner and your mum and dad, your husband, your parents-in-law and your best friends are screaming themselves hoarse, and when your children are bouncing up and down like mini maniacs, you don’t feel remotely tired. You feel – and I must apologise in advance – you really do feel EPIC. 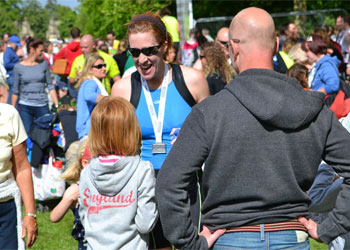 You feel unbelievably, insanely, fantastic. It wasn’t overwhelming, like Eton Dorney. It was overwhelming, like the Olympics – and I was going for my gold medal. Emotion kicked in after seeing my daughters and I started to cry, but soon had to knock it off. Running and crying doesn’t work and I was heading for an asthma attack and an early exit. So I pulled myself together and headed down the home straight. I high-fived everyone I could (including the kids) on the way through to the finish! “Did you win mummy?” shouted my youngest as I collected my medal. “Yes, I did! I won! I won!” We danced and cheered.

My advice to you, whether novice or seasoned pro is: Don’t forget the power of the crowd. Don’t be shy.  Don’t be proud. Round up everyone you know.  Take the kids and give them placards. Pay your friends in beer. Pay for their hotel bill. Do whatever it takes.  Get your Olympic support crew rolling big and shouting out loud. You’ll feel invincible and you will swim, bike and run faster for them. You’ll want to make them proud. And then you will be an athlete.