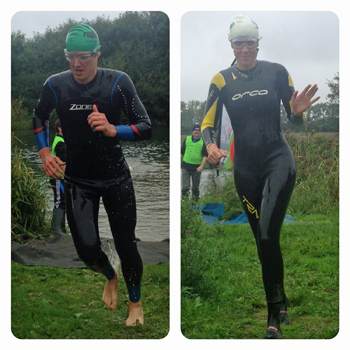 I’ll take a guess that it isn’t getting a puncture. That doesn’t really enter your head. I bet it isn’t getting stuck in your wetsuit or falling off your bike on a tight turn, either? I’m sure for most people the real fear of triathlon, certainly if – like me – it is your first season, or if – like me – you aren’t a strong swimmer, the fear is that open water swim. The cold water. The dirty water. The mass start. And the gnawing fear that you know isn’t really likely to happen, but might do (because said fear is beginning to consume you!) the fear of being last out of the lake. It’s a big one. And it happened to me this weekend.

A 1.5k swim is a long way for me and I haven’t swum that far in a single session before. To allay my fears I entered a swim competition at our local lake, where my swim coaching team RG Active have been attempting to teach me to swim this summer. Twice a week, all summer long. I competed in the 2km, 3-lake challenge earlier in the season and finished in 52 minutes, winning the most improved swimmer award. (For context the race winner finished in 30 minutes. Nice!) I was hoping for a match on my time, perhaps even a bit of a PB, despite not swimming for a couple of weeks, having completed the Great North Run the weekend before. I was going for it and, after all, there’s always someone slower than you, isn’t there? And I have been training all season long. All season long.

On the morning we registered – husband and I. In honour of his position as male winner in the last race he was registered as #1 and wore the #1 hat. He entered the lake proud and raring to go. I got the number 77 hat, which annoyed me fractionally, as my last number was 75. I know this bore no relevance to anything, but Mrs Doubty Doubtfire was camping in my brain and was already having a field day.

Siren went and off they splashed. I took a confident line and left a little space for the speedy folk to get ahead and there I was, slow and steady, number 77 was rolling. Slight issue mid-lake with foggy goggles saw me cleaning them out, which was just enough time for the couple of breaststrokers behind me to warm up, regulate their breathing and steal on by. Before I knew it, they had crept away and I could see I was starting to lag. By the first buoy, it was evident that I was last: the patrol jet ski was tailing me. Irritating. But I could handle it. Slow and steady… I exited the lake to a LOT of cheering. (The sort that makes you feel a bit angry – pity cheering. Again Mrs Doubty Doubtyson in control).

I gasped, “Is Nick winning?” and thankfully he was. At least his race was going to plan. I forced a smile at the kids (bless them) and waved at the cheering folk. I half-heartedly jogged to the next lake, where husband was just finishing up his lap as I approached. I waited to cheer him on. “You’re miles ahead” I whispered, high-fived him and in I dived. After a few hundred metres my sighting told me I was now two buoys behind the others and rage kicked in. I turned around and started to swim back to the edge. What really was I thinking to try and do this? I can’t even swim properly, my shoulder hurts (or is it my ego?) and I might as well give up now. Urgh, worse still, the Coach sees me, shouts to see if I am OK, and then sends over the rescue boat. Humiliation immediately squashes the self-doubt and I turn around. It’s going to be hard work, but I’ve done this before and I’ll do it again if I’m the last one out (!!!) Yet again, last and flanked by the patrol boat, I crawl my miserable way around lake two.

As I enter lake three I ask again, “Is Nick still winning?” Yes everyone cheers and off I go. Lake three is the longest and hardest. Get trapped in the weeds, have a few more tantrums in my head. Think about why I ever thought triathlons were a good idea. Yadda yadda. Doom, doom… As I entered the water at far end of the first lake for the final 400 metres to the exit, I finally bucked my ideas up.

I did some thinking about my style and the underwater catch. Concentrated on breathing both sides, instead of always the right. I waved a little salute to my personal jet ski lifeguard and lengthened my stroke. As I felt my breathing regulate, and I could see the team clearing away the race markers out of the corner of my eye, I dared think to myself that perhaps endurance was for me. I only seem to really get going after one kilometre and slow and steady is a good style. Perhaps entering next year’s UK Ironman 70.3 wasn’t such a bad idea after all?!

I finally exited from the lake to lots of cheers, the entire family jumping up and down and everyone – literally everyone, as they had all finished by now – clapping and whooping as I grinned my way over the line. Nick had swum a PB and was the overall race (and series) winner. I came in 9 minutes slower than last time and in last place. But everyone was very supportive and kept reminding me how well I had done. Emotional drama aside, I was actually only 2 minutes behind the person in front. And, not forgetting, I had lapped everyone at home on the sofa! Oh yes I had. I felt a quiet sense of achievement and celebrated in the style of all good triathletes… with a 35km bike ride and a 5km run, topped off with a protein shake.

So, it turns out that coming last isn’t that bad. Take some solace in that, if you are worried. You really needn’t be. Why? This is Britain: Britain loves an underdog. Just watch X-Factor!  Perhaps I’ll sing my way around Hever next weekend…