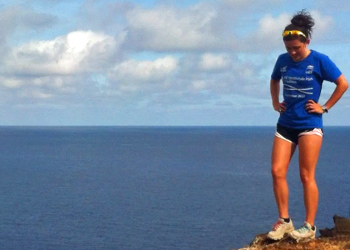 Pentathlon took off more than I expected – and led me to the world class talent programme. This saw me into Bath University where the MPAGB governing body is based. However, as adamant as I had been that I was going to leave education as soon as the chance arose, having a degree behind me offers a huge sense of security as an athlete – a career that is so unstable and unpredictable.

Like any child – career ambitions changed by the hour. But maybe the most consistent ambition was to be a top athlete – it took a while to decide which sport it would be, but the fact remained the same.

In my third and final year of University and first year of triathlon, I knew that I had so much more to give and so much I could improve on. I contacted the coach (now my coach) at Loughborough and explained my situation and ambition, and to my surprise, he gave me the opportunity to be a member of the performance squad, and show him what I believe I’ve got.

That one move gave me a new found confidence – that someone believed in me and my potential enough to give me that chance.

An athlete’s support system is absolutely invaluable – it’s a long and tough journey and certainly not one you can do alone. Family and friends, coach and team mates, supporters and sponsors. These groups are integral to an athlete’s journey. That’s why I am so very grateful to Trigirl for their support in 2014.

I am really excited to be working alongside them. Their kit is gorgeous and I cannot wait to see the 2014 range! Trigirl is so much more than a brand that offers clothing exclusively for women. They go above and beyond just a ‘clothing brand’ to arrange training days, offer kit and nutritional advice and inspiration for all triathletes of any level with any aspiration.

Trigirl are very proud to be sponsoring up-and-coming British elite triathlete, Katie J Synge, as one of our 2014 ambassadors. We look forward to following Katie’s progress throughout the season and wish her the best! For more details see Katie’s own website here.