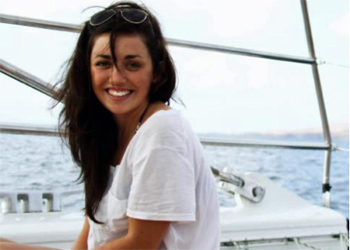 Katie J Synge is Trigirl’s Elite Ambassador for the 2014 season. She trains full-time with the High Performance Squad at Loughborough. This squad is coached by Gavin Smith and is a small group of dedicated athletes committed to success in triathlon. Loughborough is also British Triathlon’s National Performance Centre. Katie has had a great start to her season with a big running win at Grizedale in the Lake District. We caught up with her as she prepares for the National Duathlon Championships on 30th March. She also recently received the exciting news that she has been selected to compete in a European Triathlon Cup race in Portugal competing alongside GBR triathletes Vanessa Raw and Katie Hewison:

Many congratulations on your Grizedale win and on selection for the European Cup in Portugal. I imagine this season couldn’t have got off to a better start?

Thank you! Grizedale was a good excuse for a weekend in the Lake District with Dad, who as a keen marathon runner had spotted the races. I really love running, and especially loved this off-roader in the mud and rain in the mountains with some great views! Portugal was great news too – it has added some focus for the early part of the season, and will be a great marker to see where I am and will highlight the key areas to look into more before the season begins in June.

How did you get selected for the European Cup race?

My coach Gavin Smith encouraged me to put my name forward, so I sent my race CV (a race CV consists of key race results, background and current training times and form) off to the British selectors who then, four weeks prior to the race, select the athletes to fill the allocated GBR spots.

You also have the National Duathlon Champs on 30th March which you must be excited about. Do you view a duathlon as a warm up race for triathlons, or do you enjoy them as races in themselves?

The duathlon is my first multi-event since London last September, so it is a very much a warm-up for the upcoming season but I hope to put in a solid performance, nonetheless! Having come from a running background  I do enjoy duathlons but up until now I have only done a few local ones. This will be my first national championships and judging by some of the names on the start list, it’s going to be a pretty brutal race!

Just thinking about selecting your race schedule for the year, when a race such as Portugal gets added to your race calendar, does it alter your race goals in terms of which ones you’ll stick to and which you’ll opt out of or place less emphasis on?

Quarteira (Portugal) European Cup being added to the race schedule hasn’t changed much. We (my squad and coach) are actually out in Portugal for a training camp for two weeks prior to the race, so it will be a case of finding a balance between volume, intensity and race-specific training while we are out there. It is at this point in the year where the training routine you’ve had over the winter begins to become slightly interrupted with the odd race and travel, so you have to decide which ones to train through and which ones hold greater significance and consequently you will back off for.

Following on from this, could you tell us a bit about how you select your races? Being elite, do you pick some races for the prize money on offer, or are some races more likely to be noticed by selection panels for example? It would be so interesting to have a little insight into this.

At my stage in the game – I pick races that will give me good experience and push me. I am only 21 and still relatively new to triathlon compared to some of my competitors so I am still learning such a great deal with every race. I feel that this year as my first year full time, is very much a development year, and it might be a couple more until I am a key contender in the top level races. In the meantime I am trying to put in solid performances that will identify me as a potential key contender in the upcoming seasons. My coach and I sat down earlier in the year to select the key races – but the schedule is always open to change.

And finally, a tip for our readers, what do you have for breakfast before a race?

Two favourites accompanied by a cup of tea: