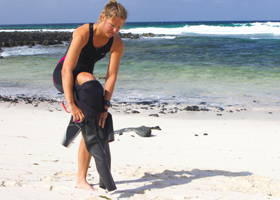 After months of swimming indoors in an overheated, chlorinated, lucky-if-it’s even-25-metres pool, it is with great joy that we announce that it is officially open water swim season here in London!

There may be those die-hard open water swimmers amongst you asking, ‘Isn’t it always open water swimming season?!’, but here at Trigirl we are not ashamed to admit that we prefer our swimming water at least 10 degrees before we take the plunge. And local lakes are opening up now that their magic 12-degree barrier has at last been reached, so we’re not alone in our preference!

Now others amongst you might be wondering, ‘Isn’t 12 degrees still pretty cold?’ The answer is yes… which is why we would recommend a good wetsuit!

In warmer climates, wetsuits are not always a must for triathlon, but here in the UK, it is often the case that water temperature requires you to wear a wetsuit while racing. British Triathlon rules state that in races 1500 metres and under, wetsuits are mandatory for water below 14 degrees. And longer races require them at even higher temperatures. Rules aside, in water that cold, a wetsuit makes the swim a lot more bearable (and open water swim training much more fun, too)!

So how do you choose a good wetsuit? We knew you’d ask that, so we’ve written an article with our wetsuit buying tips. And if you’re looking to buy one, look no further than Trigirl – we now stock women’s-specific Zone 3 wetsuits, in a range of prices. We think that Zone 3 wetsuits are the best in the market at their price range, but don’t take our word for it – Zone 3 has received numerous awards from top triathlon magazines, including a 10/10 rating for the Aspire wetsuit in 220 Triathlon!

Open water swimming is truly fun and there are an amazing number of locations to enjoy it throughout the country, in lakes, rivers, lidos, and, of course, the sea (see The Outdoor Swimming Society’s Wild Swim map for ideas).

So suit up, and get swimming!