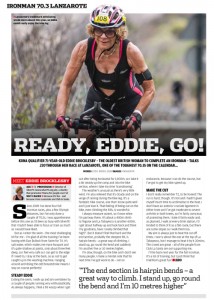 Trigirl Inspiring Woman, Eddie Brocklesby, has been more than a little busy lately. Not only is she the oldest British woman to complete an Ironman (she’s done four fulls since 2009 and is signed up for Lanzarote next year), she has also been busy doing everything from blogging for The Guardian, being selected as a Living Legend for Remember a Charity week, promoting her own charity, Silverfit… and now she’s featured in 220 Triathlon magazine!

220’s coverage of Ironman 70.3 Lanzarote includes the article, ‘Ready, Eddie, go!’, Eddie’s race report of the event, which, for her, is a much shorter course than she’s used to. She’s pictured looking competitive on the bike- and wearing Trigirl!

Why does she do it? Eddie says that she ‘just thinks that triathlon is great fun!’ We’re proud that ‘Irongranny’ Eddie is racking up accomplishment after accomplishment and especially honoured that she wears Trigirl!