Trigirl is proud to announce that we are once again partnering with Deva Divas triathlon and quadrathlon. Held in Chester on 14th of  July, Deva Divas is a short distance ladies-only race, providing fantastic support for beginner and improver triathletes. They offer beginner’s seminars (one this year already attracted 55 fledgling triathletes!), training days, bike workshops and more.

Registrants to Deva Divas triathlon not only receive a Trigirl discount code, but have the opportunity to compete for Trigirl prizes and vouchers, as well.

Beginning in 2006, Deva Divas is now a very popular event- so popular, in fact, that the quadrathon (swim, bike, run, kayak) has now sold out for the third year and the triathlon is selling quickly, too.  Part of the race’s popularity comes from its winning the coveted British Triathlon “Event of the Year”, Triathlon England Club Event of the Year and also North West Regional Race of the Year in 2016. Deva Divas is also the only race to have ever won the British Triathlon award twice, after winning it for the first time in 2009. 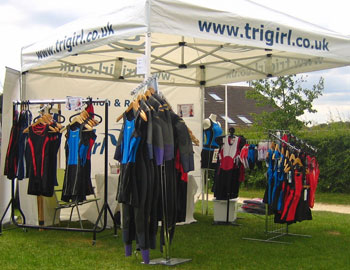 Fancy a fun women’s only sprint triathlon this weekend? Or how about just a little shopping?

Trigirl will have a booth at Chester Triathlon Club’s Deva Divas triathlon expo, this Friday, 29th June from 4pm- 6pm and Saturday, 30th June from 6:30am- 8am. Stop by the Meadows (CH4 7BB) for some great bargains on our fabulous women’s-specific triathlon clothing or just to say hello and see what we’re all about.

Best of luck to those of you who are racing. We look forward to seeing you there!