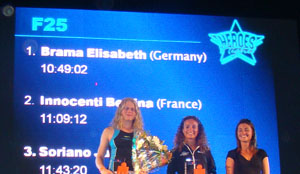 This year’s Ironman World Championships is on the day of my 28th birthday. When I found this out last year it proved too much temptation to not try and be there.

So on Sunday the 26th of June I found myself nervously standing on the pebble beach in Nice waiting for the start signal for Ironman France. There were 17 girls in my age group competing for a single slot to be on the start line in Kona, Hawaii on the 8th of October. I knew my preparation hadn’t been anywhere what I had hoped for. Would it be enough?

The 2.4 mile swim was lonely for me. I don’t know how with 2500 people in the race, but I was mostly swimming by myself and in clear water. I emerged from the sea after 59 minutes, and bang was on target.

Onto the bike, I knew I was in for a challenge. The course is challenging to say the least with copious amounts of climbing. But I had studied the course well, and one of my favourite things really is riding my bike in the sunshine, so I was having a blast. My only problem was the many many men that insisted on blowing themselves up on the first climb already causing a fair amount of congestion on the road. But I consoled myself by thinking: ‘I’m sure I’ll see you again when you are walking on the run later because you’re riding above your limit now.’ Another thing that comes with a mountainous bike course is stunning views. For that alone it would be worth doing this race again!

When I started the concluding marathon distance run, my first thought was ‘Oh, someone didn’t pack their run legs’. Luckily all was good after the first few miles, and I set about checking up on the competition. The run course in Nice is a flat 4 lap out and back affair, so keeping track of others is fairly easy to do. I soon figured out that I was leading the age group, and in all likelihood the only danger was going to be the girl with #64 who at this point was 10 minutes behind. I was definitely running scared! But then she only made up 30 seconds over the next lap, so I calmed down a bit. And then I actually managed to increase the gap to 14 minutes by the next lap, and switched into safe mode: Just bring it home, because in Ironman it is never over until it’s over.

Running towards the finish line passed in a bit of a blur, but as soon as I had crossed it I just had to smile. 10:49 hours for 16th overall, and the age group win! And the best early birthday present ever: A trip to Hawaii!