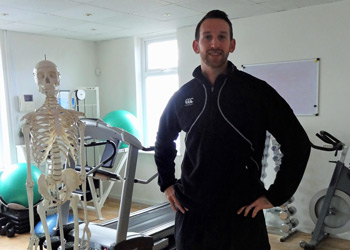 On the back of recurring joint problems, I’ve had the last couple of years off running. Consequently, I decided to enlist the help of my physio to get me back in shape for the run leg of the tri. The aim was to sharpen my performance while at the same time avoiding any further problems.

Dom* is a trained PRI (postural restoration institute) therapist. He is passionate about the potential to improve athletic performance (and avoid injury) by addressing our postural imbalances.

In layman’s terms, we humans are asymmetrical in many ways. As I understand it, the setup of our diaphragm and the position of our liver mean we all tend to shift and rotate our spine to the right, sooner and more often than the left. While these asymmetries are beneficial in many ways, if the imbalance goes beyond the norm, this right-sided directional pull can really dominate our movement. This can be the cause of injury, fatigue and performance plateau/drop.

Not surprisingly given my problematic hips, my running gait was out of kilter. Not driving off equally on both legs is a classic symptom of this postural imbalance. Over time it results in some muscles becoming weaker while others overcompensate becoming too strong and tight. Ultimately, as you’d expect, this hampers performance and can lead to re-injury during triathlon run training.

The good news is that this imbalance can be addressed quite easily with a specific set of exercises that can be done as part of a warm up and cool down. The exercises are subtle but pretty straightforward to do. The trick, as with any therapy, is building them into your routine and doing them consistently. 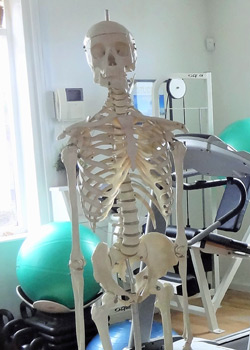 A few weeks on and Dom gave me the thumbs up to hit the road for the first time. Weather-wise it was a typical Manchester afternoon with horizontal rain and a biting headwind! Undeterred and with a wicked playlist teed up, I ventured out. While no speed records were broken that day, I managed to complete the 3 miles I’ll need to run for the race itself. This was a good start to my triathlon running training, I was happy.

Most importantly, my joints held up and there were no ill effects afterwards thanks largely, I think, to the input from Dom and the work I’d put in on the exercises.

Now I just need to work on that speed…….