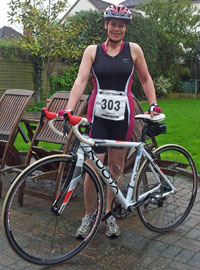 Well, my first tri of the year came and went last bank holiday Monday at Hart Leisure Centre in Fleet.  On Sunday night I packed my bag, checked and re-checked it, then loaded my precious bike into the back of the car.

I woke with a few nerves on Monday morning, put on my lovely new tri suit which outshone the old and battered running shoes I’d decided to wear.  I predicted that the cross country run was going to be a mud bath after all the rain.

The venue was already really busy when I got there just before 9am an hour before my designated start time.  There’s a really great buzz at these events, it’s contagious.  Everyone is busying themselves, setting up their bikes and laying out their kit for the transitions.  It’s very exact, with gels, shoes, hats, gloves, all being laid out in a very specific manner.  I seemed to have more ‘stuff’ than anyone else and was very glad that I’d brought some big plastic bags to lay over and under my kit, as it was threatening to rain at any moment.

It was freezing, so once I’d registered and had numbers written all over me in permanent pen I had one last loo stop before heading off to the pool to wait in line to start.  Having done the same event last year it felt quite familiar and I felt relaxed as I took everything in.  I even had someone asking me for advice, which tickled me no end.

The 400m swim felt great, I found the 16 lengths relatively easy.  My biggest frustration was the lack of pool etiquette. The general rule is if someone touches your toes as you swim, then at the end of that length you should let them overtake.  Well, one guy just wouldn’t let me pass even though I was virtually on top of him.  I didn’t have the nerve to overtake with someone heading straight towards me in the other lane.  So, I ended up asking him as politely as I could manage if I could pass and eventually he did! So, my swim ended up a disappointing 13 seconds faster than last year.  Clearly, that is why I found it easy – I wasn’t pushing myself enough at all!

Next, a slow jog from the warmth of the pool area to the bikes, it was really chilly – more October than May… The bike section went by in a cold, wet blur.  Without doubt my new bike felt so much better than my old mountain bike, but the rain started about 2k into the ride and just got heavier. I was surprised to see that my time was 6 minutes faster than last year and that was in terrible conditions, without cleats and bike shoes, so I’m hoping I can make a bigger improvement next time.

As predicted, the run was like a challenge from Total Wipeout!  The entire run, over rough fields, was a squelchy bog – it was really tough on my legs, which already felt like lead.  There was even a point when we had to run through a stream.  I was pulled out by a very nice man throwing out a rope for me…  I found myself giggling with the absurdity of it all!  No surprise then that I was slower than last year, but only by 28 seconds.

So, overall I was slightly faster. That feels great, but more importantly I loved every minute and can’t wait to get going again in 2 weeks time.

Rachael Willis – First Triathlon of the Season: Off and Running!