Last Sunday morning (15th of July) was the date for my third triathlon of the season, the Hillingdon Series Race 3 in Harefield.  I had been quite anxious about it in the run up, as it was going to be my first lake swim of the year and the weather hasn’t exactly been kind!

I woke before the alarm and found myself squeezing into my new wetsuit at 5.45am.  I’d decided it would be better to at least get my legs into the suit before I left the house and finish off when I got there.  I’d followed advice and smothered myself in body lotion and then used an anti chafe balm around the points where the suit could rub.

I arrived at the venue around 6.45 and got in line for registration. Listening to the chit chat in the queue, I realised that this was different to other events I’d been to.  It was smaller and full of experienced, super fit men and women who were all raring to go! There were at least two triathlon clubs with a big presence, I wished I had some team mates to share some banter with.

Time was running out, I quickly laid out my kit, racked my bike and headed down to the lake for a debriefing.  I finished off wriggling into my wetsuit and asked for help zipping it up at the back.  While I was listening to instructions for the swim, I was also planning a strategy to avoid being in the middle of the scramble to get going at the start.  Particularly because both men and women were starting together, gulp!

We had the opportunity to warm up in the lake and I’m glad I got in to acclimatise.  It took my breath away when I hit the water, not because it felt particularly cold but my breathing was quite restricted in the wetsuit and I was also getting used to the very murky conditions.  It was quite a shock and I had to really work hard to keep calm and breathe slowly and deeply.

I moved to the edge of the group just in time for the horn to sound and off we went.  It was bedlam for the first 30 meters or so, arms and legs everywhere but I got through it unscathed! The swim was roughly 800m and for the first 200, I found it really tough.  I changed my breathing to bilateral, every second stroke, rather than the usual trilateral which did help me get into a rhythm.  Once I was in the swing of things, I actually started to enjoy it!  I certainly felt fit enough to swim the course, albeit slow and steady… 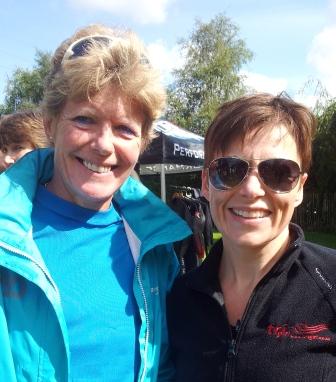 Unusually the next leg was the run – 6k on road and farmland.  It felt much more familiar to be on dry land and I was so delighted that I’d finished my swim that it kind of carried me through.

A 25k cycle finished the event.  My new bike makes such a difference and although I came in fourth from last, I did manage to overtake a couple of mountain bikes!

I felt so proud of myself for finishing, yay I did it! I stayed on for the prize giving and bumped into Jo Lewis, who runs the ladies Chalfont Tri Group.  Without her fabulous coaching and advice I would never have been able to attempt such a challenge, thank you Jo!