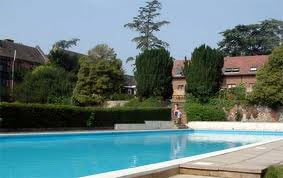 I’m sitting writing this looking at a very grey and miserable day… Exactly a week ago, there was glorious sunshine and I was about to start my second triathlon of the season.

The event was at Shiplake College, just outside Henley on Thames. It was in a beautiful setting and even though I had to arrive at the ridiculously early hour of 7am (a 5.45 alarm), the glorious surroundings managed to put a smile on my face! The event was very laid back and quite small really. I loved the relaxed feel and would highly recommend this as a first event – there were two distances: Tri a Tri with a 300m swim, 14.5k bike and a 3.2k run and a Sprint with 400m swim, 28.5k bike and 5k run.

There was music blaring from a huge speaker and the bike racking was very laissez-faire, on a first come, first serve basis… All very good in principle, but some people took up space for 3 or more bikes which made it really tricky to find a gap. 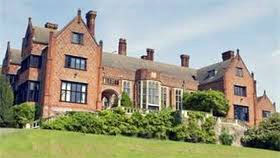 The swim was in an outside pool in front of a very grand building, it felt more like St Tropez in the sunshine! We were set off in rotation and to my surprise, had to count our own lengths!! This was a challenge… it sounds ridiculous, but I’m incapable of counting beyond around 8 lengths so had to really concentrate. The water was surprisingly choppy and I had some very big, fast men to negotiate in my lane. I did lose count at one point, luckily I had started with a girl in the next lane and we were a very similar speed, so when she jumped out, so did I!

I was excited and nervous about the bike leg. It was longer than usual at nearly 29k and I was using my new bike with cleats and new shoes. I had a temporary panic when I couldn’t find my bike (no racking numbers, see!) and then trying to get out of the enclosure was slightly chaotic, with other participants making final tweaks to their bike and even pumping up tyres in the middle of the gangways!

Once I got going, warmed up my legs and embraced my new-found speed, I loved every minute! For the first time, I even overtook other competitors (on mountain bikes of course!). All in all my speed was close to 17mph, around 4mph faster than previously. Only thing I need to sort out for next time is how to reduce my saddle sore!!

After a relatively speedy T2 (transition between bike and run), I headed off for the run leg. By this time it was around 22c and feeling very warm. We were all directed down to the river and although my legs were like lead, it was hard not to enjoy the views as I ran along… What I hadn’t prepared for was the ‘beast of Shiplake’ – a very steep hill to finish the run. It was a killer!!

All in all, I thoroughly enjoyed the whole experience. There’s another event in August, which involves a river swim, I may well go for it:

Hi Katie,
Congratulations on a great race! It sounds like a lot of training and some equipment upgrades are really paying off.
As far as your saddle sores, we usually find that Trigirl’s women’s-specific cycling pad helps, but if you’re still having trouble… our secret is diaper ointment pre-ride. Sounds weird, but it works!

Another idea is a female-specific saddle. Sometimes it takes a little test-riding to determine which is best for you, but they often have wider seats to help support a woman’s wider hips and cut-outs or special padding in sensitive areas 🙂